Hi guys, today I’m delighted to have C.D. Gallant-King over on the blog, in honour of his newly released book Hell Comes to Hogtown. Take it away, C.D.!

THE TRAILER
THE INTERVIEW

Tell us a little about yourself. When did you first start writing?
I’m a dad and a husband and a gamer and oh, yeah, a writer. I currently reside in Ottawa, the scenic capital of Canada, but I’m originally from Newfoundland and spent many years in Toronto. I have a degree in Theatre and I’ve been an actor, a stage manager, a lighting technician, a printer, a retail manager, a secretary and a public servant in addition to being a writer, which is probably the reason you’re reading this. I doubt you have an interest in stage lighting design. I also briefly wanted to be a rock star, but that’s a story for another time.The first story I ever remember writing was a sci-fi piece about an alien invasion. I was probably about five years old and I made my babysitter to look up how to spell ìextra-terrestrialî in the dictionary. I’ve been writing genre fiction ever since.Tell us your latest book, Hell Comes to Hogtown.
Hogtown is about a hapless loser named Fitz who works at a comic shop and can’t get a date to save his life. When a beautiful woman walks into his shop by accident one rainy night he thinks his luck might actually be changing… until she gets him implicated in a murder and kidnapping case involving the prime minister’s family. Fitz and his best friend – a womanizing, drug-addicted professional wrestler named Dee – go on the run from the cops trying to clear their name only to discover there’s something way worse than the cops on their tail. A creepy, murderous hobo hounds them at every step… and he may be some kind of demon.

So how did it come about? What’s the story behind the story?
Hogtown is the mixture of several threads I thought would be different books but somehow got blended together in one story. I had clear ideas for a few characters that I wanted to use somewhere (the wrestler, the pathetic comic store employee and the giant demon hobo in particular) so I decided to throw them in. Most of them were pretty comic, funny characters. I really wanted to write a supernatural mystery with a dark bent, with monsters and murder and horror. People are going to die. So armed with those ideas as well as a bunch of scenes that I wanted to write, it all coalesced into what you see now.

Horror and comedy may not seem to complement each other, but I believe it’s actually quite the opposite. I think the two go hand in hand. In order for tragedy to have the strongest impact, sometimes you need a lightness to come first, so that it catches you off guard. And you can’t have something that’s endlessly bleak, either (unless you’re Cormac McCarthy). You need moments of levity mixed into a dark story, otherwise it’s just sadistically pounding you in the heart with a hammer for no good reason. If done properly it’s a roller-coaster that keeps you constantly off guard and engaged, which I hope I pulled of successfully with this book.

What is your writing process?
It’s evolving. In the past, Iíve usually started with just a few scenes – usually the beginning and the end and a few points in the middle, and then started writing around them to so where it goes. While this is a free and fun way to do it, itís also time consuming and potentially frustrating. The scenes donít always fit together as well as I would like once you fill in the middle parts. For my next book Iím doing way more outlining and plotting in advance than Iíve ever done before – Iím hoping that with a better framework Iíll waste a lot less time and the book will come together faster and smoother. It may also be less fun, but that remains to be seen – Iíll let you know.

Who are your favourite authors?
Terry Pratchett, Kurt Vonnegut, Christopher Moore, Neil Gaiman, Stephen King, Cormac McCarthy, Ken Follett, Chuck Palahniuk. I’m currently really digging PG Wodehouse. My first book, Ten Thousand Days, was my take on Gaiman. Hell Comes to Hogtown is my Christopher Moore. I have other unpublished works that are takes on Pratchett and Palahniuk. I suspect (at least hope) my author voice will end up being some unholy combination of all of those, I’m still working on it.

Fitz is a broke night manager for a grubby comic book store. His only friend Dee is a drugged-out, womanizing pro-wrestler. Together theyíre the most pathetic losers on the face of the planet. Their lives cannot possibly get any worse.

And then theyíre implicated in the kidnapping of the prime ministerís wife.

On the run from the cops, Fitz and Dee discover there is something far worse than the RCMP stalking the dark streets of Toronto. They are being hunted by an ancient demon of unspeakable evil with an insatiable taste for blood… or maybe itís just your run-of-the-mill giant murderous hobo?

Either way, life in prison might be better than whatever the creepy drifter has in store for themÖ

THE LINKS
You can purchase Hell Comes to Hogtown at any of the fine retailers below:
AMAZON.COM | AMAZON.CA | AMAZON.CO.UK
KOBO | BARNES & NOBLE | iTUNES
CREATESPACE | SMASHWORDS | GOODREADS
THE WRITER 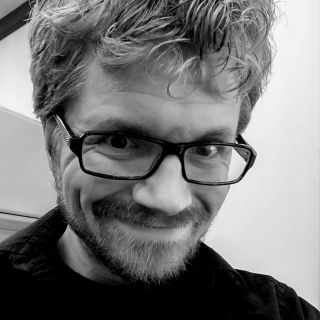 C.D. Gallant-King is an independent writer originally from Newfoundland, Canada, though he’s not fond of fishing and hates boats. He moved to Toronto to study theatre, and then later moved to Ottawa where he does absolutely nothing related to theatre.

He hangs out on Twitter and Facebook, and blogs at Stories I Found in the Closet and Rule of the Dice.