Picasso famously said: “Good artists borrow; great artists steal.” I won’t go as far as to say that I’m a great artist, but one of the things I love to do is to steal — and I steal a great deal, from all over the place. So I thought it would be fun to take you through a tour of all the influences and steals that went into creating Damsport, the city in which The Bloodless Assassin takes place.

It’ll come as no surprise that I stole from Victorian London, and I purposefully gave a little nod to Dickens in creating Pip, a cheeky chappy urchin. I won’t discuss the Victorian influences though, as I think they’re quite obvious.

The less obvious steals come from all over the world: Hong Kong, Istanbul, Constantinople, Mumbai, Japan, Cambodia, general 17th century Europe, sort of from Colorado, and Macau, at the current count. Often what I stole is utterly random and I doubt you’d be able to spot the inspirations on your own (if you can, bravo!)

Let’s start with the biggest influence: Hong Kong. I live in Hong Kong and grew up in London, so the first thing I did in creating Damsport was to take Victorian London and push it through a Hong Kong sieve. Hong Kong is the banyan trees that grow everywhere, the humidity, the storms, the crookback streets, the smells, the food, the crush of people in the streets. Regarding the banyan trees, the photos below are taken in central Hong Kong. The top one in particular is in Mid-Levels, one of the most modern and built up parts of Hong Kong. Banyan trees can grow anywhere — including out of walls it seems — and the top photo was the inspiration for the rundown house Rory and Jake lived on top of.

Hong Kong is also part of the inspiration for the Wet Market. Fruit/veg/meat/fish markets in Hong Kong are called Wet Markets, partly because the produce for sale is fresh, partly because the floor is always wet, and it’s best not to think too much about what is in the murk on the ground. Especially when you see the gusto with which fish are eviscerated!

(I have a particular walk when wearing flip flops — apparently — which means that with my heels I flick up any mud/sludge/dirt/etc up the backs of my legs. Yes, I’m that ladylike. My many visits to wet markets over the years have made me far more familiar with the wet filth of the ground than I would have liked. It’s grim. Which was why when I had to describe a market I immediately thought of how wet the floor would be.)

We also went to a Wet Market in Cambodia (in Kampot to be precise) that was covered with a hodgepodge of tarps and bits of plastic stretched overhead. It caught most of the rain (it was summer and rainy season) but the water still dripped through the gaps, so that the entire market seemed to be dripping — you could hear the water drip above the chatter of voices. That gave birth to the ‘dripping’ description of the Damsian Wet Market.

The woman sleeping in a hammock among her cuts of meat in the Damsian Wet Market is real — I stole her wholesale:

The book maze at the edge of the Great Bazaar was stolen from Mumbai book sellers, and I still regret that so little of The Viper and the Urchin takes place among the maze of books — stay tuned, this might be the scene of part of a future story! We discover Damsport’s library in The Black Orchid, and I have a bit of an idea for a story featuring scheming librarians, so it’s very much a possibility.

I stole the Old Cistern from Istanbul, and of course I bastardised the Grand Bazaar name, although the Damsian Great Bazaar is nothing like the Istanbul version. I also stole Istanbul’s Blue Mosque to make the baths in Spirepass, and while I was at it, used that kind of architecture to inspire the entire area of Spirepass including its name. 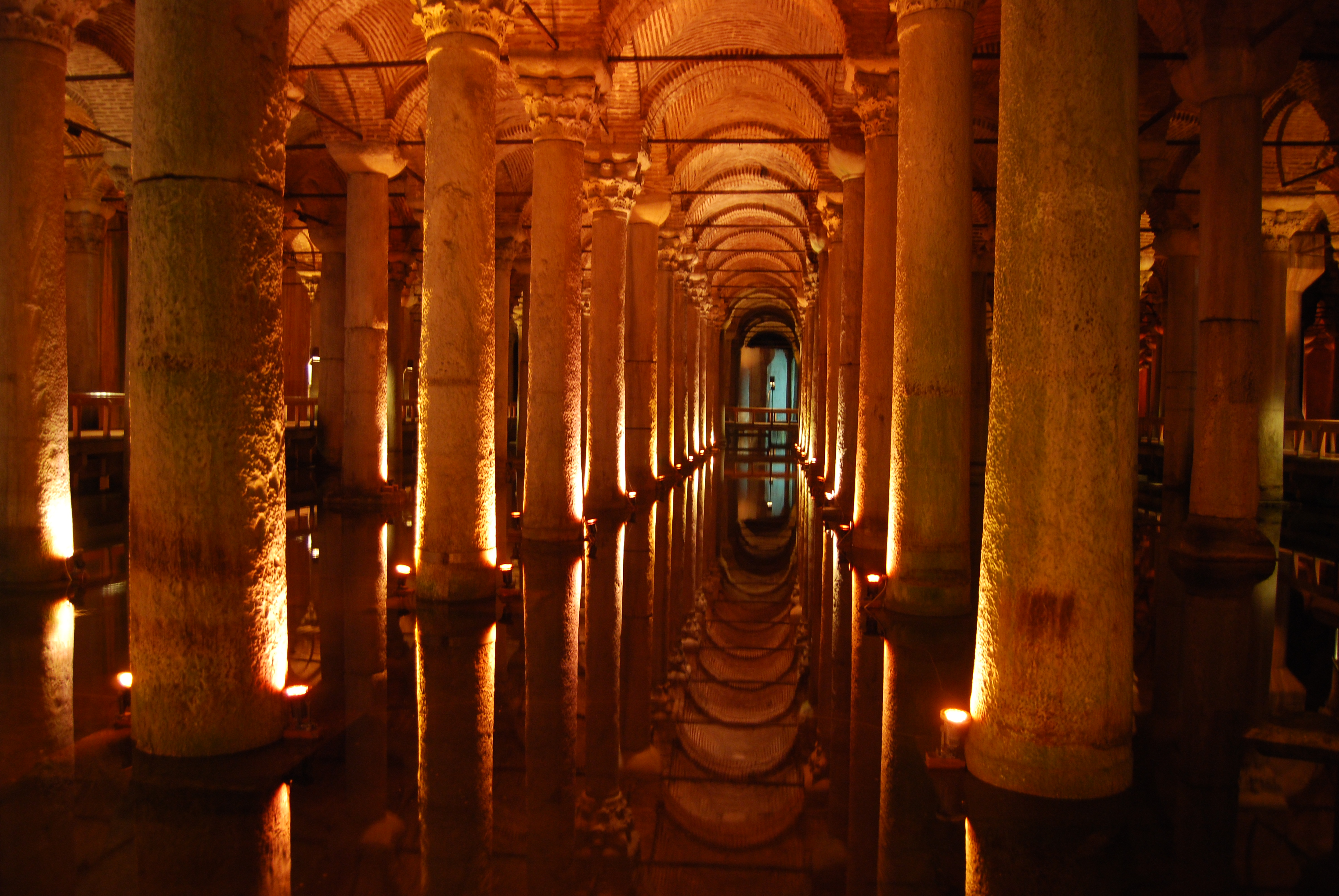 From Wikipedia – the Old Cistern

From Wikipedia – Blue Mosque — inspiration for the Damsian baths.

I purposefully made Damsport a port city so that it could justifiably have a real melting post of influences in terms of its architecture and culture. But in working out its political situation, I turned to Constantinople, another port city. And while there’s nothing actually recognisable from Constantinople in Damsport’s architecture, I used it as inspiration to work out how Damsport would be defended. This led to the creation of the Bottleneck Wall, which led me to the Three Day Battle and to Damsport’s current political situation.

Two very random steals came from Japan. I very much doubt anyone will be able to guess where the Japanese influence is, though. The first is the cats in the Damsian cemetery. I was in Tokyo, wandering about on my own, and I chanced across a cemetery. Now I love cemeteries — I find them fascinating. I went walking around the tombs, and I kept coming across these fat cats, most of them white, bathing in the sun and regarding me with that hostility particular to cats. And I thought there was something delightfully creepy about a hostile cat lounging across a tomb and glaring at me as if telling me to leave.

The fun thing about Fantasy is the ability to take something real and twist it into something fantastical — so these cats became the cats in the Damsian cemetery who are voiceless and who appear only at night.

I also stole an old street sweep from Tokyo. I came across an old man with a broomstick that had to be 2 meters long that he wielded in a semi-circle around him to push dead leaves away. Sadly I didn’t take a photo of him but I thought he was too perfect not to steal. I added the vapour lamps hanging from a pole stuck down the back of his shirt to create the Damsian street sweeps. The sweeps are actually one one of my favourite little details of Damsport.

Closer to home — at least digitally — I stole from a fellow blogger’s blog post: from Sammy over at Bemuzin, which technically means I stole from Colorado, I guess. Back in 2014 she wrote about an exhibition she went to see: the stunning Chihuly Garden Cycle show featuring incredible glass sculptures. I thought glass sculptures was such a wonderful concept that I decided to feature glass sculptures as part of the Revels towards the end of the book.

Speaking of the Revels, another act comes from The House of Dancing Water, an incredible show that I saw in Macau. I stole the masts rising from the water from that show (I won’t say anymore to keep the post spoiler-free). If you’re ever in this part of the world, this is one of the most amazing shows I have ever seen.

I also stole and embellished on 17th century European currency. There was a real problem back then of people shaving or clipping the edges of coins, and then melting all the shavings and clippings and making new coins. This problem is what led to our modern coins having edges with writing or patterns on them, so that if the coins were clipped, it would immediately be obvious. I thought that was a fun detail to steal and I decided that Damsport would have the same problem but would deal with it differently. Since the city has both clipped coins and a quantity of foreign currency flowing through it, the logical thing to do seemed to have them deal in coin weights rather than coin values. The expression ‘making change’ then became a fun literal interpretation: Damsians go to smiths to make change by cutting coins up into smaller pieces.

That said I don’t always realise when I’m stealing, and some steals I can’t identify even now. Crazy Willy and his steamcoach, for example: I have no idea where that came from. Likewise for Susie’s coffeehouse and the butterscotch coffee. I detest coffee, so who knows why that idea popped into my head!

Not all steals are successful, either. My most extensive piece of research came to absolutely nothing. I read a large biography of Isaac Newton’s life when I was thinking about how to develop the science of alchemy for Longinus. Newton didn’t just discover gravity, he was an incredible polymath, but he sadly wasted a lot of his time looking into alchemy and I thought I’d find useful inspiration in his life’s work. Turns out Longinus’ alchemy has nothing to do with Newton’s (not a shocker, in hindsight). Not wanting the time I spent reading Newton’s biography to be a complete waste, I put a little nod to him in the form of the prism found in Dr Corian’s place. It has absolutely no bearing on the story, I doubt anyone noticed or remembered it, but it was a nod from me to me, referring to the research I’d done so I could tell myself that I got at least something out of that book.

I don’t actually think reading that book came to nothing — I got some other stuff from it which might be useful some day. Maybe one day I’ll write a new post like this and tell you one of my characters is partly stolen from Newton’s life. Who knows.

So there you have it, all the steals that went into creating Damsport — at least the ones I can remember. There’s bound to be a great many steals that I’ve forgotten about, and a great many more that I can’t figure out. If you’re curious about any other part of Damsport feel free to ask me in the comments and I’ll see if I can figure out where the inspiration for it came from.

The sequel to The Bloodless Assassin, The Black Orchid also takes place in Damsport, and I’ve added a few more steals — more from Hong Kong (I’m milking the place dry!) a very obvious one from Morocco, and I stole from one of my uncles.

Book 3 in the series is already in the works, but it will take place in a new city and I’m currently creating it (oh such fun!). So far I have influences from Indonesia, more from Hong Kong and Cambodia, a very random steal from Beijing, and an unexpected one from Brittany of all places (a place in France. Papa et Maman — it is indeed from Perros-Guirec). I’ve also taken inspiration from the eyebrows of a singer I really like. I’m hoping to have the third book ready and out by the end of the year, so keep your eyes peeled! In the mean time, if you want to check out The Black Orchid, you can find it here on Amazon. I hope those of you who read it will enjoy it!

PS: I know not everyone reads on Kindle. If you have another kind of e-reader but you want to read The Black Orchid, you can buy it on Amazon, email me the receipt, and I’ll send you an epub instead 🙂 you can find me at celine (at) celinejeanjean.com

19 thoughts on “Deconstructing Damsport: a round the world tour of the research and inspiration behind the creation of the city”